NOFASD Australia is celebrating our 20th anniversary of providing advocacy and support for families living with FASD! While we still have a huge distance to go, we are taking a moment to look back on what has been achieved and how much has changed in Australia in 20 years.

NOFASD was founded in 1999 by a small group of volunteers including Sue and Tony Miers to address “the apparent lack of information and acknowledgement of FAS in Australia”. Sue Miers has been a driving force for two decades and continues to provide leadership, wisdom and support to the organisation as a volunteer. NOFASD was run on a volunteer basis for many years and continues to receive much support from wonderful volunteers. Sue was motivated by her personal experience of caring for a child with developmental impairments and being unable to find information, a diagnosis or appropriate support services in Australia. In 1999 Sue had the opportunity to attend the Prairie Province FASD conference in Canada which led to her daughter’s diagnosis of FASD by one of their leading diagnosticians. On her return to Australia she wrote a report highlighting the Canadian work in this area and called for the immediate establishment of a national working party to advance diagnosis, prevention and intervention, and for the urgent dissemination of clear, accurate, complete and consistent information on FAS.

Although the implication of alcohol use during pregnancy was medically known in Australia in the 1980s it seems little action was taken to raise public awareness. Public knowledge of the risks of alcohol during pregnancy was minimal until Sue Miers persisted in sharing her personal learning with people who would listen. Two recognised experts on FASD, Professors Elizabeth Elliott and Carol Bower, recently presented Sue with a Lifetime Achievement Award for her persistence, persuasiveness and patience in alerting paediatricians and policy makers to FASD and initiating their interest in this important issue. Read more about Sue Miers here. Sue Miers was presented with this painting at her tribute dinner

Until 2005 NOFASD Australia struggled to attract attention and had gained no government funding despite an ever-increasing need expressed by families. FASD was not a registered disability in Australia, and there was no Medicare rebate for its diagnosis. No clinical guidelines for diagnosing FASD had been developed and there were no specially trained multidisciplinary teams. In 2005 Sue Miers submitted the following to the developers of the National Alcohol Strategy:

As a matter of urgency, the Strategy must include initiatives to address Fetal Alcohol Spectrum Disorder at every level – i.e. public awareness and education, surveillance, early identification and diagnosis and intervention and management. Broad-based efforts are required, given that this is possibly the most serious and far reaching health problem ever faced by Australians, we cannot afford to underestimate the devastating lifelong impact FASD has.

Now, in 2019, Australia is a leader in the field of FASD. While much more needs to be done, huge steps have been made towards understanding, supporting families, and preventing FASD. Australia now has diagnostic guidelines for FASD and a limited number of multidisciplinary diagnostic clinics. The Australian government recently launched the National FASD Strategic Action Plan 2018-2028 alongside a commitment to continue funding progress in this field. NOFASD Australia are grateful to receive funding from the Australian Government Department of Health to continue our important work of advocating for, and supporting, families with FASD and running prevention campaigns across the country. Read more about NOFASD’s activities in our annual report. 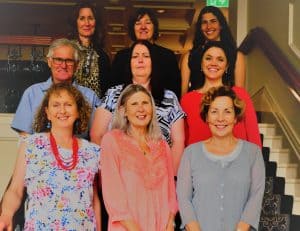 Some of the NOFASD Australia team

2019 also marks an important anniversary for FASD internationally. The very first International FASD Awareness Day was held on the 9th September 1999. NOFASD is proud to be the first organisation to acknowledge this day in Australia. The newly formed NOFASD committee took part in the 9:09 minute of reflection in Adelaide to acknowledge all those living with FASD and to reflect on what action can be taken to support them and their families and to prevent future cases of FASD wherever possible.

The first FAS Day began on September 9, 1999 in Auckland, New Zealand, where “Minute of Reflection” bells rang at 9:09 a.m., at Mt Albert Methodist church. Then it moved to Adelaide, Australia, and then to South Africa, where at 9:09 a.m., Cape Town volunteers gathered to hear the War Memorial Carillon that rang when Nelson Mandela was released from prison. Volunteers in Italy, Germany and Sweden held events – and then FASDay crossed the Atlantic. There were events in every time zone across Canada and the U.S., including ringing of carillons in Toronto, Niagara Falls, Hastings, NE, and Austin & San Antonio, Texas. The westernmost activity was the community breakfast on the tiny island of Kitkatla, B.C., near the Queen Charlotte Islands, where the village bell rang at 9:09 a.m. followed by prayers in the native tongue by village elders.

Please join us on 9th September this year to acknowledge International FASD Awareness Day! We’re excited to see how much FASD awareness and knowledge will grow in the next 20 years!

NOFASD Australia stepping out in our Red Shoes Rock for FASD

NOFASD Australia runs a FASD hotline 7 days a week on 1800 860 613 or through the contact form online. Please contact us for support, referrals and information.