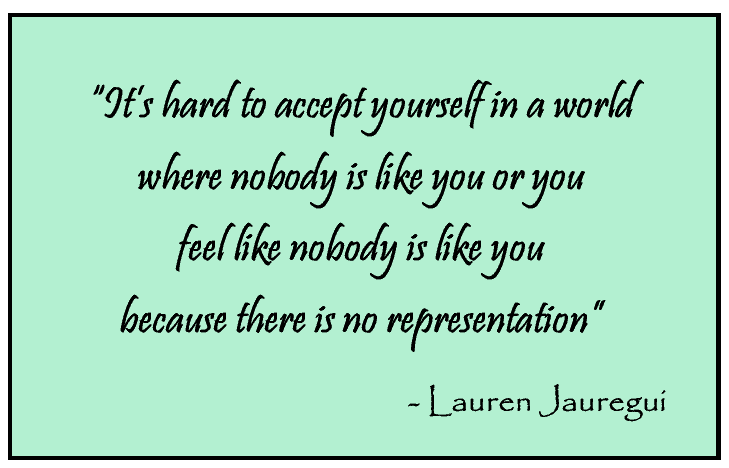 As a person with FASD I never saw myself represented in television or books. The closest character I could relate to was Amelia Bedelia because in the books she would take everything literally, like if someone asked her to “draw the blinds” instead of closing the blinds she drew a picture. The representation ended there. Amelia Bedelia is a fictional, one dimensional character.  I am not. Neither is anyone else. Being represented and involved in the mosaic of society is important, it is a basic human instinct to belong. It is especially hard when you are different and sometimes the differences cannot be seen. When you act or think differently, because there is no reference point or example of anyone else having these troubles one can feel very isolated and that makes things even more difficult.

I have found that not being represented has its problems. When I tell somebody I have FASD I hear a number of things like: “what’s that?” When I tell them, they say “oh yeah I’ve heard of it, but I don’t know what it is.” This is despite the fact that FASD is the leading cause of birth defects, with at least 10% of the population born with it. When someone does think they know what FASD is, they often say things like “oh you don’t look like you do” or “do you just have a mild case?” These things can be hurtful, and even dangerous. People need a reference point, and these days it is usually needs to be in the media.  When people are not represented or depicted as whole people, they are not understood, they are not accepted.

For a long time the only things people thought about in regard to FASD were the severe facial features and the shocking brain pictures of the 1970’s. So if you didn’t fit into those categories, to the majority of the public, you didn’t have a problem, therefore you should act and think and perform like everyone else. What the public doesn’t know is that the brain picture is that of a 6-week-old baby who did not survive. Our brains do not look like this. I advise anyone who has FASD or anyone that knows someone with FASD, not to pay any attention to this picture. Shocking though it may be.

In the last few years though people have started to hear about FASD and it is mentioned more frequently. However, the information being taken in by the larger public seems to be limited to a few sentences in a science or medical text book, information that is so old it should be carbon-dated. FASD has almost, in my opinion, been promoted to the newest boogie man. Something people are afraid of but never have seen. It gets mentioned but nobody knows quite what it is. Ignorance is not always bliss especially when it comes to knowledge about this disability.

This brings me to my next issue.

The things said about FASD in the media.

I have noticed recently that the topic of FASD is being mentioned more and more in media, however mostly negatively. For example, the movie Bad Santa 2 shows Billy Bob Thorton and Kathy Bates discussing whether the kid in the film has ”fetal alcohol syndrome.” Let me set up the scene… The kid in the film is slow and naïve. They are all sitting in living room and the kid says “one time I ate turkey bacon and didn’t poop for three weeks.” To which Kathy bates asks “Is this your spawn?” Billy Bob Thornton, offended, replies “do I look like I made him?” and Kathy bates reply is “well if that ain’t fetal alcohol syndrome then what is it?” This exchange happens in the trailer for the movie. This is one of the scenes producers found okay to advertise to get people to watch this movie!

Some other examples: on the tv show Young Sheldon, Georgie is depicted as dumb and failed a math test. Sheldon questions if his mother drank alcohol while she was pregnant with Georgie. On the Netflix series Orange is the New Black, there was a simplistic stick drawing on the wall and one of the women wondered if a person with FAS drew it. Just a few days ago (while working on this blog), I took a break to watch Seth Meyer’s show, one I enjoy watching and which boasts having “a diverse group of writers.” During his show he made a harsh statement. In a segment called “You Burnt,” he talked about shark week. In this segment he says “hammer head sharks – what’s up with that weird-ass head? Did ya mamma drink while pregnant?”

If we are not being portrayed in Hollywood as stupid or dumb or being laughed at, we are being vilified in the news media. FASD is being blamed for crimes being committed. One of the most recent is a Daily Mail article about a shooter in Florida having FASD – this has been proven to be untrue. Whenever someone with FASD does commit a crime it the head line reads “individual committed crime, suffers with FASD.” This is true that people with FASD do end up sometimes entangled with the justice system but so do many other people. And nobody ever reports how many crimes are committed against someone with FASD, the media only reports the crimes committed by someone with FASD.  We are portrayed as murders and rapists, unable to not do these things because of our brain damage. I, for one, have never murdered or raped anyone and have managed to live 34 years with this disability. Also, as if wonders never cease, I don’t have a head shaped like a hammer head shark.

In any other brain and body-based disability (autism, Down Syndrome) no one would EVER consider these harsh remarks or depictions funny, or acceptable. Why FASD?  It needs to stop! Not only are they wildly inaccurate, they are deeply hurtful and as I said dangerous. Remarks have real world impact on what people think, how they feel and how they view themselves in relation to others.

This disability is already stigmatized, we don’t need to feel more isolated than we already do. As a person with FASD, messages like these sent out into the world make me sad, and truthfully a bit scared. I know these portrayals don’t represent me or people I know, but the world that doesn’t see us as people, will see the media version. It makes our world all the more unsure and much harder than it has to be.

FASD is a disability, and it is real! It impacts and affects everyone differently and has many different aspects to it. But beneath all this we are people, in search of acceptance and belonging. We are not perfect. Neither is anybody else. However, I think a more accurate and diverse depiction of people who go through life with this disability should be represented and encouraged. We can no long afford to be left out of the mosaic of human life. We count. We belong.

This blog, written by CJ, has been re-published with the permission of the Asante Centre in Canada. It was originally published in January 2019 and can be viewed at https://www.asantecentre.org/developmental-stress-blog