As it is for many affected by FASD, December is the hardest time of year for our family. In addition to Christmas, our young person who lives with FASD celebrates his birthday early in the month. Once upon a time there was a clear respite of a few days between the two celebrations, but our young person is now eager to merge the two and keep a continual flow of excitement which feeds the adrenaline he seeks, just like an addiction.

But of course, in my Mama Maremma (MM) role of guiding and protecting my son, I’m onto him!! Earlier and earlier each year, strategies are devised and put into place to prepare for what has become known in our family as “The Month From Hell”. If we could avoid this month… we would! This year, I actually suggested we rip the December month out of our calendars and we could just skip into January… all problems solved. Sadly, I realised that the rest of the world would not comply.

One of the December strategies I have used is to avoid the hype that builds when our Christmas Tree is erected and decorated. Instead of the artificial greenery that was always covered with lots of glitter, tinsel and lights, for the last couple of years I have organised for a “real” tree to be delivered just before the big day and decorated with just a few decorations. The rest of the house remains decoration free. Whilst not a “cure”, it has helped to reduce the overall hyperactivity, which ultimately leads to impulsive and problem behaviours.

So, December was flowing and we were in super management mode to get through.  The long awaited for Birthday arrived and the day was progressing ok with us ensuring our management plan and strategies were all being followed and used. My husband and I were hoping that a couple of gifts received would provide a distraction for our son which would enable us to enjoy some much needed recovery time.  THEN came the knock at the door that changed our day immediately… our Christmas Tree had arrived a week early!! With not enough orders the following week, the supplier needed to deliver all orders that day and we were left holding the tree, but wishing it would disappear. Our son immediately went into overdrive, ordering and attempting to organise the tree’s immediate placement and decoration.  Apart from this tree’s arrival ruining our well-designed management plan, it was nearing the end of the day and time to transition to the much waited for bed time routine, which we had hoped would lead into a restful evening.

Attempts to re-direct our son away from his intense Christmas Tree focus were to no avail. Decorations were locked away in the shed and not easily accessible, which added another difficulty to the situation. Offers of completing the task the next day were not acceptable and very quickly we were dealing with a verbal and physical meltdown. So, as any other Mother working desperately to maintain order amidst their FASD chaos would do, I quickly picked up that tree, unlocked our front door and threw it into what I hoped was oblivion. This all happened so fast that my family audience barely knew what was happening. Of course, the initial shock of what I had done quickly vanished from our son and he became distraught at the knowledge of his decorating plans disappearing along with the tree. For me, it was a situation of damned if I do, damned if I don’t. I attempted to divert attention again by explaining the origins of the Christmas Tree and how many years ago they would be decorated in the woods with items from nature and be an object of beauty. Our son’s feelings were clearly communicated with his answer…” That’s STUPID!!”.

The next few days were once again super-managed and we remembered that we never achieve anything productive during this month… actually it feels like we don’t achieve anything at all. We were almost congratulating ourselves on how well our plan was going, until suddenly our son began his attempts at setting up his desired Christmas gift outcomes. An expensive item was the gift of choice and many attempts from our son were made to secure its purchase. With a clear answer that it wasn’t possible, he launched into a very clever Santa plan. If Santa purchased this item for him, he would set up a payment plan to repay its costs in installments. In addition to this, he would not expect future gifts… or at least only small ones. After I had run this by Santa, via the Santa phone (of course!), I advised our son that it was not something Santa offered. Not the answer he wanted, but it seemed to be accepted… a bit!

However, the next day our son became full of anxiety and meltdowns, as the realisation set in that he had run out of options for this gift and our life was then centred around just getting through the day. The intensity did not ease and our son could not move past his fixation to secure his desired gift. My MM persona kicked in to protect and guide our young man through this difficult time, so I sat him down and firmly explained (as I do every year), what Christmas is all about and relayed a story I had read in the newspaper that morning. In that story, Christmas was described by using the analogy of a King who loved his servants and wanted to show them how much he loved them by have a party for his birthday and inviting them all to celebrate with him. This was enjoyed thoroughly by all, but each year it slowly changed and people didn’t actually come to celebrate with him, but instead had their own celebrations which were in fact nothing to do with his birthday. The people even invented a man in a red suit to deliver presents…….. oooops!! I didn’t get to finish the story. Our son quickly asked the question many parents dread, “SO – IS HE REAL??”. I gave a lovely neutral answer of, “If you want him to be real, he is”.  Obviously not good enough, because the demands for an answer became much more insistent. I then gave an explanation of how the figure of Santa Claus began and how he has evolved into a modern enterprise, complete with Santa tracker both for his Christmas delivery movements and letters. Our son seemed to be taking this in very well and I was just a little bit proud of myself, but then… “So, HE’S A FRAUD!” I was attempting to form an answer to this statement when he added, “and you lied to me!” Well yes, I could see that it would look like lying to him, but I gave some sort of feeble answer about how it was something that was a bit of fun, but seems to have got out of hand. He totally agreed and thankfully moved past the part of us lying to him and became focused on the fraud part.

Fast forward to Christmas Eve and our low-key Christmas was coming along nicely.  Our son asked if he could decorate the discarded Christmas Tree which had been slightly rescued and placed against a tree in the front garden. I attempted to hide my delight as upon his request, I allowed him to pick flowers, greenery and leaves to adorn that tree and transform it into a beautiful scene.  Decorating the tree outside and with nature, had a completely different effect than the usual hype and anxiety that occurs when he decorates a tree in our house. He was calm, relaxed and had the most gorgeous smile from the pride he felt. Later in the day he announced that he thought it was still important to carry on the tradition of Santa, so he offered to play the role himself and asked us to not look as he rummaged through items in the house, searching for something he could slip into our stockings (yes… Santa would come to us too as part of the game), ready to surprise us on Christmas Day. Of course, he asked for a small gift for himself in his stocking.

Then came Christmas Eve night… traditionally a night of NO sleep for us, as our son would be so anxious, excited and hyped about the arrival of Santa and the gifts he would bring. This time, he SLEPT ALL NIGHT!!!! We awoke in disbelief upon the realisation that we had not been woken once. For our son there had been no anxiety about what Santa would bring, no excitement about what he would do with such gifts and no hyperactivity as a result of all of this, which would ultimately lead to behavioural problems.

As a family who have welcomed Santa into our own and our children’s lives for over 50 years, we now questioned our dedication to the Santa story and all it entails.  Thinking in FASD terms, it was unknown, over-stimulating and unpredictable… all of these would contribute to a recipe for disaster for someone with FASD. Admittedly, some years have been better than others, but that really was due to our fine-tuned management plan and a bit of luck. We’ve also had some great family members jump on board recently to help us in setting up for the best outcome possible. But in reality, it is not an enjoyable time for us and one we now dread instead of look forward to.

Having Santa visit your house is a very personal decision for families and one which comes with no judgements from MM, however from our recent Christmas experience which has left me viewing Santa Claus through a FASD lens, I would like to pose this question to you and your family…. 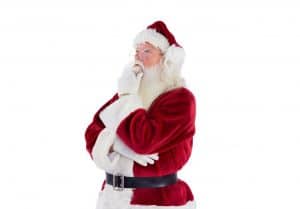 Mama Maremma is a full-time carer for her child who is living with FASD.  She likens herself to the Maremma breed of dog who are renowned as guardians and protectors. PrevPrevious ArticleTHE MORNING AFTER
Next ArticleMORE THAN WORDSNext